skip to main | skip to sidebar

Not just your typical assistive-lift system, the Surehands lifts excel above the competition through encouraging independence with a unique holster design that allows users to access the toilet, shower, and bed on their own without assistance.
Where other lifts systems use a sling to lift the person out of their wheelchair, the Surehands lifts also offers a holster setting, the Surehands Body Support, with padded and shaped metal arms that slide under the arms of the user, and a strap that goes under their legs, leaving their body open from the mid back to the knees, which a sling typically covers, hindering the user from doing any of their bathroom business on their own. 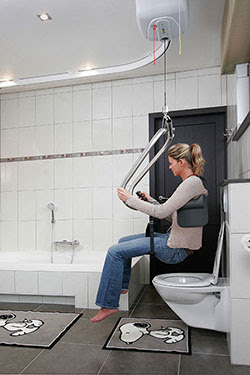 The track system typically runs from the bed into the bathroom, through a sliding door if necessary, raising and lowering with a remote control that hangs around the users' neck for ease of use. The track or multiple tracks are built to access as much of the room as possible.

We tested one of these lifts at the Wynn Hotel in Las Vegas; there are only four rooms out of over 2,000 with lifts in them, and they are requested often.
Vegas doesn't taut these lifts, nor does Wynn, which is surprising to us, but true; perhaps because they do not want the need to outweigh the supply, as the lifts are already highly requested even without their advertisement. However the high use of these lifts should encourage not only the Wynn line to brag about their access, but should also encourage other hotels to begin to offer the same universal design to bring in this growing market of travelers with disabilities, who spend over $13.6 billion annually on travel in the US alone (as of 2005).

We’d love to see Surehands lifts in your hotel. If interested in catering to this huge niche with this assistive device, or for more information, videos and images, visit the Surehands website at www.surehands.com.
Posted by Andy Kennedy at 1:17 PM 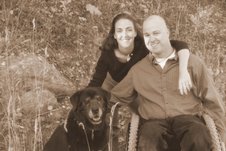 Recommend something to us by emailing us directly at ask@accessanything.net and we'll get to the bottom of it's pros and cons immediately!